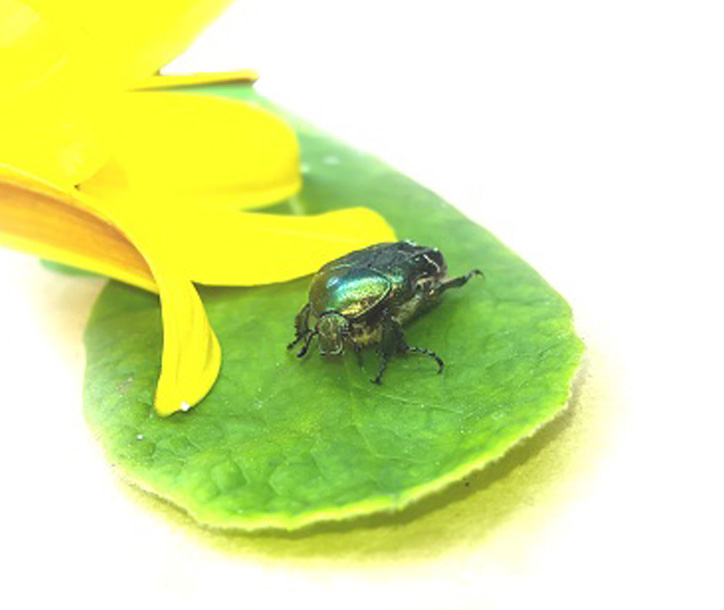 Japanese Beetles: Their Season Is Here!

Out of all of the pests that feed on plants, the Japanese beetle is the most destructive. It was accidentally introduced into the United States about 100 years ago. It thrives in the Pittsburgh area, where there is plenty of grass to house the beetle’s grubs, plants for the beetles to feed on, and no predators to thin their considerable numbers.

These insects are 7/16 inches long and are recognized by their metallic green bodies and brown wings. They aren’t very strong fliers and may fall to the ground if they run into your patio door. Still, they can fly from place to place, even miles away, and eat vegetation as they go along.

First, these insects are hatched from a beetle’s eggs around July. From the eggs come beetle larvae called grubs. They are small, plump, white C-shaped creatures that live in the soil near your grass. During their time as a full-grown grub, they feed off of the roots of your grass, which damages your turf during the late summer and into fall.

After eating their fill of grass roots, they lay dormant deep in the soil. They metamorphosize into their beetle form around June and emerge from the ground. Then, the adult females lay eggs, and the whole cycle begins again.

What Do Japanese Beetles Eat?

During the time that they are feeding, Japanese beetles will then start to eat the leaves, flowers, and even fruit of nearly 300 species of plants. While just one beetle won’t cause much damage, they tend to feed in a group. These insects can eat an entire plant in a short period of time, then move on to the next one as they progress through their short adult life.

They like to eat on sunny days, and even though Pittsburgh isn’t known for sunny weather, they will still be destructive to many of the plantings that you have in your yard.

The best way to eliminate these insects is to have Superior Lawn Care apply grub control in the summer, which ends the beetle’s life cycle early, before they can overwinter in your ground and turn into adult beetles. However, if you already have a beetle infestation, Superior will apply a pesticide that will deter the beetles from eating your foliage and flowers.